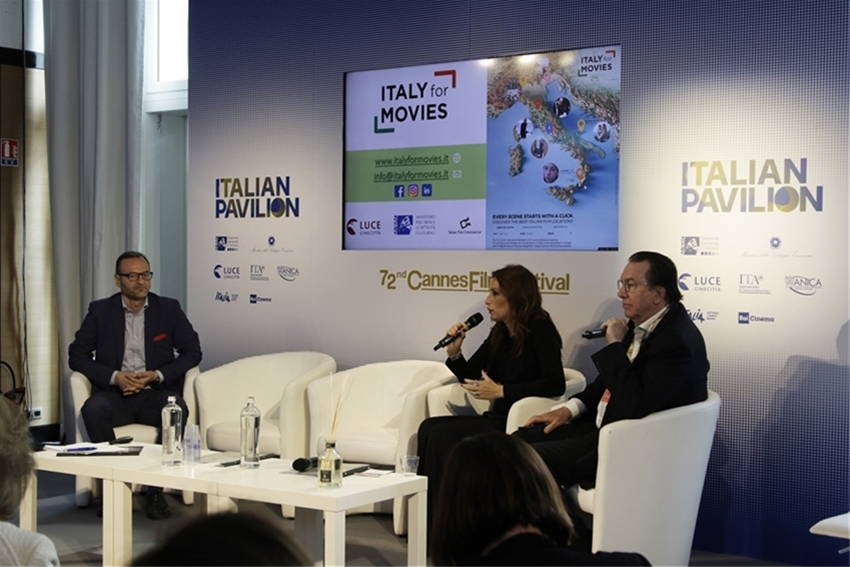 Italian directors Alice Rohrwarcher and Jonas Carpignano (both jury members in Cannes) attended the event at the Italian Pavilion in Cannes for the presentation of the Cinecittà film studios. Besides them Jane Campion, who shot The Portrait of a Lady in Italy and still remembers fondly her time in our country. The event was meant to take stock of what has changed since the studios got back under the control of Istituto Luce Cinecittà one and half year ago. These changes register the actual revival of a brand which is a passport and pride for Italy in the world, as MiBAC undersecretary Lucia Borgonzoni underlines. “Cinecittà is a flagship for our country. It’s a brand that doesn’t need presentation as everybody knows it abroad. Still, we must love it more, valorize it, and don’t take it for granted.”. Borgonzoni also highlighted how the relaunch of Cinecittà should pass through operative interventions that look at the future, in order to make it “an independent site able to work autonomously, without being at the mercy of this or that government.”

Roberto Cicutto, President and Managing Director of Luce Cinecittà, listed the important international productions that have been hosted in Cinecittà in the past year: from Fernando Meirelle’s The Pope starring Anthony Hopkins, to the series Catch 22 with George Clooney, Grant Heslov and Ellen Kuras, to Michael Bay’s Six Underground and Paolo Sorrentino’s The New Pope, just to mention a few. “We are pleased that Italian productions are coming back to Cinecittà. For too long, they thought that shooting in a studio was too expensive or complicated. At the moment we are working with Sergio Castellitto who is building a Parisian neighborhood in Theatre 5, while Donato Carrisi just wrapped the shooting of his upcoming film starring Dustin Hoffman and Toni Servillo. We are hosting a Netflix production too, directed by Francesca Comencini and Susanna Nicchiarelli.”

The studios also host big public and private events to the extent that they have been awarded as one of the best Italian locations at the Best Event Awards 2018. Among them, the second edition of the RomeVideoGameLab has just finished. The festival-workshop dedicated to the world of videogames is an initiative produced and promoted by Istituto Luce Cinecittà which firmly believes in the potential of videogames combined to the world of cultural heritage, knowledge, training and education. As Cicutto highlights, the so-called applied games are seen as an actual cultural and industrial enterprise.

The present relaunch of the studios goes through the awareness of its past. In the words of Cicutto: “We keep on defending our great past, but we must link Cinecittà to its future developments in order to be ready for the global market. Compared to the past, Cinecittà presents now a more complete and diversified offer, also thanks to the great development of TV series. We aim to complete shortly the industrial plan too as interventions for the construction of a new technologically advanced theatre are underway. We also plan to readapt the existing pool to allow underwater shooting.

This comprehensive plan also includes a marketing project in collaboration with leading trade magazine Variety aiming to provide information on what it means to shoot in Italy, what are the pros and concrete opportunities offered by Cinecittà. This is all part of a strategic plan that also include the launch of the studios new website, presented by Andrea Spagna, and Italy for Movies, the national website for location scouting and production incentives, that has now presented the demo of a new app to be officially unveiled at the upcoming Venice Film Festival. As Borgonzoni states: “When they presented this website, I immediately thought it was a very useful tool both for industry insiders – who need to know which are the assets available in our country – and the tourists – who are increasingly aware and willing to make new experiences.”

The legislative interventional aiming to attract more productions in Italy are a key point in this process of development of the audiovisual industry. Borgonzoni states: “If we want to attract both Italian and international productions, the tax credit is definitely an important tool. However, we must make the bureaucratic process easier for those who come to shoot in Italy. We must provide them with a clear fee list, make deals with local offices in order to get quick feedbacks especially when shooting is already underway, create cinema-friendly regions where it is easier to go and shoot a film. The Ministry aims to create a structure that could facilitate who choose Italy and Cinecittà to make film.”