John Turturro stars in Cinecittà-set “The Name of the Rose” 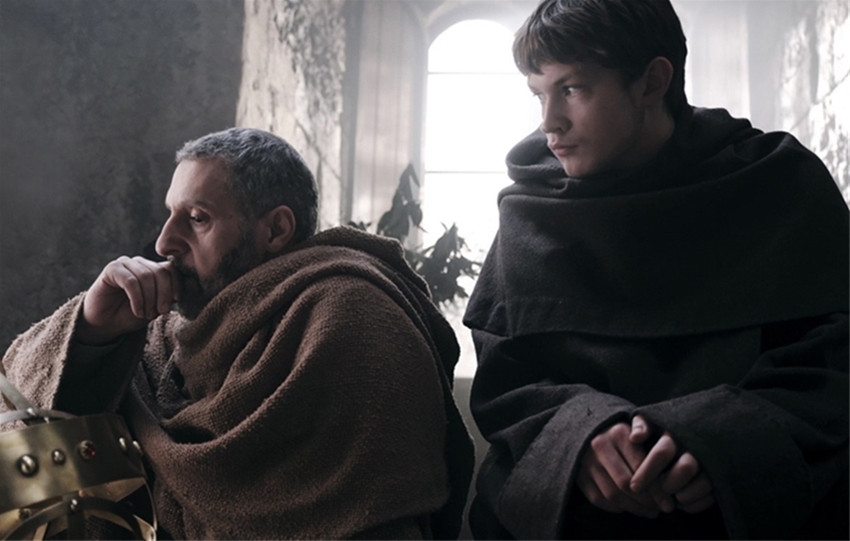 “We’ve been very faithful to the descriptions of the book and to the drawings of Umberto Eco in the design of the set. We just took some liberty with the abbey as we decided to make it more magical and less harsh, inspired by a rich and mature gothic style.” This is how Giacomo Battiato, director of international series The Name of the Rose, comments on his work.

The high-budget production has been shot, for the most part, in the Cinecittà studios under the supervision of art director Francesco Frigeri. Published by Bompiani (the first edition dates back to 1981), the best-seller by late Umberto Eco was already brought to the silver screen in 1986 by Jean-Jacques Annaud with his adaptation starring Sean Connery. The book sold 55 milion copies worldwide while this series will be aired in 133 countries. This new adaptation expands the narration from the claustrophobic thriller to the historical events of the fourteenth century: the diffusion of the Franciscan doctrine, the clash with the papacy, the heresy of Fra’ Dolcino… In the words of the director: “The enterprise was not an easy one. The Name of the Rose is not only a novel, but a great book that contains it all – History, philosophy, love, the role of women in the Middle Age, terrorism, knowledge. The challenge was to turn all this into images.”

Eleonora Andreatta, Director of Rai Fiction, states: “The Name of the Rose is an ambitious project that revives the international spirit of our company, strongly relaunched after the recent success of My Brilliant Friend. Shot in Cinecittà – which for us is a symbol of great Italian cinema – this film is indeed a national product, but with international ambitions, embodied first of all by John Turturro who also collaborated at the script.” Andreatta also reminds that Umberto Eco greenlighted the project back in 2015.

Andrea Porporati, who had the idea of turning the book into a series, states: “I read this book when I was 18 and it changed my way of looking at things. The assassin kills in order to prevent the rediscovery of the art of laughing, to avoid viewpoints other than those of absolutism and totalitarianism. When I met Eco, I found him to be a very fun person, but also serious and rigorous.” John Turturro adds: “It took an Italian director to rediscover my “English” part and give me the role of Guglielmo from Baskerville. The book, which I only read after accepting the role, is very modern, an important and contemporary piece of work. What interested me was the philosophy of Guglielmo, who is convinced that knowledge protects you from the abuse of power. I agree on this.”

The Name of the Rose is an international coproduction between 11 Marzo, Palomar, Rai and Tele Munchen, and it is composed of 8 episodes.