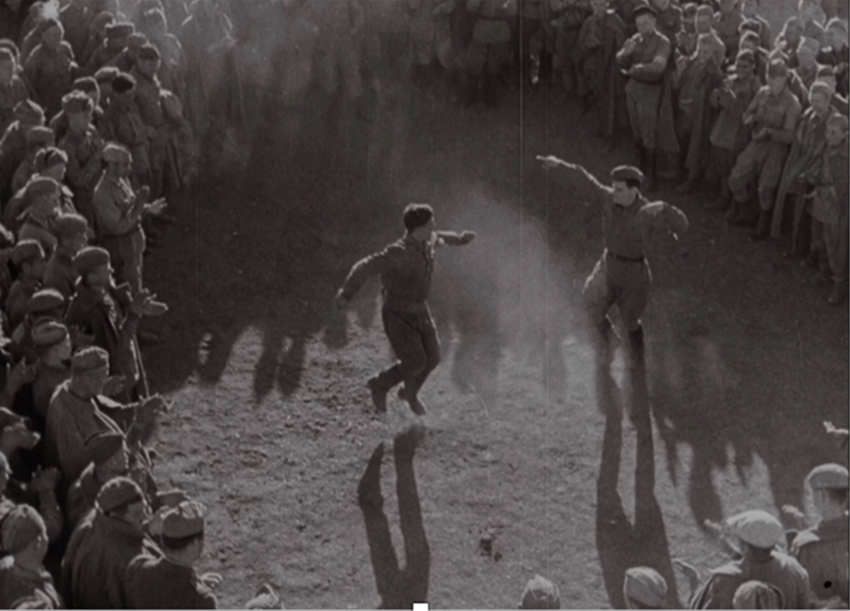 After Il treno va a Mosca, Federico Ferrone and Michele Manzolini come back with an editing moving on our history. This time we are in 1941: the Fascist army is allied with the Nazi and a military convoy proceeds victoriously toward Europe’s northeast. It’s the Russian campaign, one of the most tragic defeats for Fascism, sadly linked to the memories of many Italian families, but also depicted in De Santis (Italiani brava gente) and De Sica (I girasoli) films. Hence, Il varco, produced by Kiné, in association with Istituto Luce Cinecittà, works on materials from Luce’s archive, together with Home Movies, National Archive of family cinema, and various private funds and diaries, including the ones of Nuto Revelli, Mario Rigoni Stern, Enrico Chierici, Guido Balzani, Remo Canetta, Adolfo Franzini. The latter and Chierici filmed the journey in 9,5 mm and 16 mm with a significant technical ability.

In this way, the historic page is turned toward an intimate side, with a first-person narrative entrusted to the words of Wu Ming 2 and to the soldier voice-over of Emidio Clementi. We enter his mind, he is less optimistic of his comrades in arms filled with propaganda, because he is aware of what war is and is tormented by memories of the African front (images are drawn from Impressioni a distanza di Luca Ferro, that gave voice to his father and grandfather). It is also crossed by fairy tales suggestions told by the Russian mother, especially the tale Il soldato disertore e Il diavolo di Alexander Atanasef, that almost appears as prophetic. When winter arrives, general enthusiasm drops under the thick bitter cold, people start to die. The immense steppe, swept by snow storms, seems inhabited by ghosts. “These images affect collective history – explain the authors – but in this film we favored the most intimate part. The retreat is the best known moment, we stop before the retreat and we break down the epic tale as it is known by common sense.”

“Creating the story of a man adrift in the ‘heart of darkness’ of war – they continue – we drew from apparently faraway images: the adventure novel, folk Russian fairy tales, the dirty conscience of Fascism colonialism and the diaries and memories of Italian soldier on the eastern front. It’s a film inhabited by spirits, just as the films that compose it. Wandering ghosts in the Ukraine steppe, more and more numerous as the war gets more desperate. Recollections that meander in the main character’s mind and take him back to the colonial war’s horrors. And then, fragments of a future war that is fought nowadays in Ukraine, in the same places where Italians fought between 1941 and 1943. Past and present are two parallel tracks that, while the movie proceeds, get closer and merge. As if the wounds of over 70 years ago in the earth of Europe have never healed.” Narrating a fiction story with pre-existing material, it’s a method also used by Pietro Marcello. “It’s important that this kind of work, which is not strictly documentary – says producer Claudio Giapponesi – participate to the festival, because it often has a hard time finding its right place. Also Martin Eden comes from a philological work on archive material.”

The event is partially, though remotely, superimposable to the one told in The painted bird, by Czech Vaclav Marhoul, who indulges with a certain sadism in showing mankind universal cruelty, through people’s fierceness against a Jewish child left alone in a central Europe tormented by Nazis, Soviets and Cossacks, local ignorant peasants and superstitious women. Il varco though, give viewers ample room for thought and freedom. “We don’t want to lecture, it would be pretentious – says Wu Ming 2 – the Russian campaign is the beginning of the end of that Fascism which family movies allow us to watch with different eyes, in its everyday life. It’s a double-edged sword, because many Neo-fascists are appealing to this everyday life to legitimize Italy’s fascist era.”

Ferrone e Manzolini praise the “Will of the two archives, Luce and Home Movies, to work together to such a project, that starts from images to add writing and editing. This gives to film archives, a 20th century peculiar form, a complete and mature meaning.” And on references about present days: “Some of the towns along our soldier’s path, are now in the midst of war between Ukraine and Russian rebels. Hence, we complemented the flash backs with some openings toward the present. Wounds suffered by those places during First and Second World War, still have uncontrollable consequences after decades.”

The film, presented in Venice in the Sconfini section, will be in Italian theatres in October, distributed by Luce Cinecittà.